As I drove into the east side of Toronto yesterday afternoon, I got a notification that Canada Post had delivered a package. Actually, I got the notification from the US Postal Service, through which the package was sent. I was excited, knowing that Leslie had shipped me a few things that I needed… including meal replacement bars!

I arrived at the front door to my building, and there was an envelope for me, but no box. Hmph. I took my bags upstairs, and indeed there was a box for me on my doorstep! It was an Amazon box, and not a USPS one. Okay, still not right, but at least the new lighting for my humidor arrived.

It has happened a couple of times that the Amazon delivery guy would leave a package for me at the next building over, so before doing anything else, I took a walk over there to check. Nothing. I went upstairs and knocked on the door of the condo association president and asked if he could check the video footage for the past couple of hours. He went to look, discovering that the monitor was broken so he could not check. I started to think that there was a problem but hoped that the mailman pressed ‘Delivered’ when she meant to press ‘Held at Post Office’ which meant I would get a notification.

It was at this point that I started to think the box was lost. Speaking with Leslie last night, we lamented that it was fortuitous that she had listened to me and not included the very expensive box of sexy cigars that she bought me for Valentine’s Day, opting to hold on to them until our next visit together. 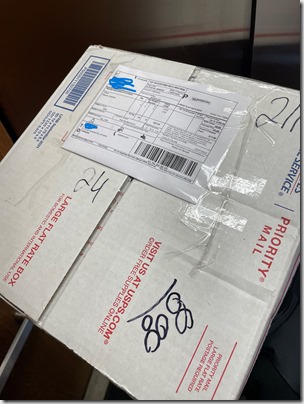 This morning, I got a cautious text from Leslie. ‘Okay are you ready for the f-up of the century? What is your address?’ When I told her last night that the package was marked as delivered, but was not here, she decided to go back and check… it seems she fat-fingered my address and typed a 3 when it should have been a 6.

I was in the middle of my morning shake but told her that as soon as I was done with it, I would bundle up and take a walk across the street. I did just that, and sure enough the package was in front of the door of the apartment with the same number as mine. Interestingly, there was no security to get into the building… I could have walked up, taken the package, and been on my merry way. As I did not want to appear to be a mail thief, I rang the bell, and had a quick chat with the resident (who I had quite obviously roused out of bed). Once he understood me (English was not his first language) he wished me well.

As I rode the elevator back down to street level, I took a picture of the package and sent it to Leslie. I did not open the box until we were on a video call together, and she could see my reactions.

Not only did I receive my meal replacements (which had the cutest Valentine’s Day stickers all over them!), I received a great little drawing of a cartoon dog and a kiss (not drawn!). I also got a shirt that I ordered to her from Amazon in October, and which was reported delivered October 30. It had not arrived, and a couple of weeks later Amazon refunded my money (saying that if I did receive it eventually, to keep it). The shirt arrived earlier this month (February, so over three months later) with no explanation. It has now gotten lost in the mail twice; to avoid a potential third time, I will wear it tomorrow.

Interestingly enough, this was not the only package to be marked as ‘delivered’ yesterday, that was not. A delivery for Princess Sophie (that had also been feared lost in transit) was reported as delivered… but is nowhere to be found. I hope that it turns up, but I am not holding my breath. While there are a couple of extras in it, the most important contents have been replaced. We’ll see what happens today… and I will ask the mailman if I see her.

Never criticize a man until you know where he has been, and you are willing and capable of retracing his steps... and doing a better job.